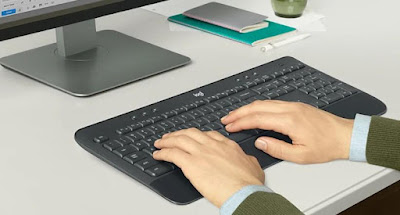 For computer users, especially desktop computers, the two inseparable things are the keyboard and mouse.  Not surprisingly, there are many people who prefer to buy both when sold as a package and are often referred to as combo packages.

Many keyboard and mouse manufacturers sell combo packages and of course Logitech is included.  Here are 5 recommended combo Logitech products.

This Logitech product combo is Logitech's best-selling product.  It is easy to predict, the best-selling of this product is because the price is very affordable.  Even though it's cheap, it doesn't mean it's cheap.

The MK100 keyboard has full size keys but its compact body makes this keyboard not take up space.  This keyboard is also quite ergonomic so you will not get tired quickly when typing with it.

You also don't have to worry about drinking coffee near this keyboard because it won't break even if coffee is spilled on it.  While the MK100 mouse is fairly standard, nothing really stands out.

The Logitech Media Kombo MK200 is a keyboard and mouse package aimed at multimedia.  The MK200 keyboard has several additional special keys that are used to control multimedia such as play, pause, volume, and mute, and even access buttons to the internet.

One of the main advantages of this keyboard is that it is quiet, barely causing a fuss when used for typing.  The letter print on the keyboard keys is quite thick (bold) so it is easy to see and is relatively durable, not easily peeled off.  Mouse MK200 is a mouse that is responsive and has a high level of accuracy thanks to the 1000 dpi resolution that the mouse has.

Wireless products require a battery to operate and the power consumption of the Logitech MK235 Wireless Combo is relatively low so it saves battery.

Economical is not the only advantage of the Logitech MK235.  The keyboard is spill-resistant and the lettering on each key uses a fade-resistant substance, so it won't disappear from the keyboard.  While the mouse has an ergonomic shape, comfortable to grip.

The Logitech MK345 Wireless Combo is a Logitech product that has a very ergonomic design, both for the keyboard and the mouse. The Logitech MK345 keyboard has wide "wings" at the bottom to support the palm (palm rest), while the mouse has a protrusion on the left side so that the right hand  more comfortable to hold.

The Logitech MK545 has a full sized keyboard and the layout is such that it provides a high level of precision and comfort when used for typing. This Logitech MK545 keyboard has several additional keys for multimedia functions and programmable Function keys.

In addition, this keyboard is also resistant to water spills up to 60 ml and has an abrasion-resistant letter print, so it will not fade. The mouse is very ergonomic and has two additional buttons on the left side that can be programmed to perform certain tasks.

Well, after browsing the five recommended keyboards, you just have to decide which one is the most suitable for your needs.